The nectar made from the plant is known in Mexico as aguamiel, or “honey water.”The Aztecs prized t 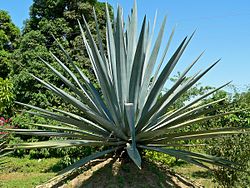 he agave as a gift from the gods and used the liquid from its core to flavor foods and drinks. Now, due to increasing awareness of agave nectar’s many beneficial properties, it is becoming the preferred sweetener of health conscious consumers, doctors, and natural foods cooks alike.

Agave Nectar has been used for centuries as a flavoring, though native populations have also been aware of its health benefits and used it medicinally. The Aztecs used a mixture of agave nectar and salt as a dressing for wounds and a balm for skin infections, and agave’s use as a folk remedy persists today.

Modern medical study has confirmed agave’s remedial properties. Agave nectar applied to the skin has been found effective against pyogenic (pus producing) bacteria such as Staph aureus. The tradition of adding salt to the nectar has been found to further boost its anti-microbial property. Agave nectar has also been proven effective against enteric (intestinal) bacteria.

Especially in the last century, the western diet has become increasingly dominated by refined sweeteners such as granulated sugar and corn syrup. The problem with these substances is their high glycemic index and glycemic load – both measures of the relative impact that foods have on our blood sugar. Foods that raise blood sugar quickly trigger the release of the hormone insulin. Excessive releases of insulin and, more specifically, chronically high blood sugar and insulin levels are linked to Metabolic Syndrome (also called Syndrome X), which is a complex of health disorders. Associated ailments include insulin resistance and type II diabetes, abdominal weight gain and obesity, problems with blood lipids (raised triglycerides and cholesterol) and high blood pressure.

One of the most health-promoting properties of agave nectar is its favorable glycemic profile. Its sweetness comes primarily from a complex form of fructose called inulin. Fructose is the sugar that occurs naturally in fruits and vegetables. The carbohydrate in agave nectar has a low glycemic index, which provides sweetness without the unpleasant “sugar rush” and unhealthful blood sugar spike caused by many other sugars. Agave nectar is a delicious natural sweetener that can be used moderately – by dieters, some diabetics, and health conscious cooks – to replace high-glycemic and refined sugars.

Honey –> Replace each cup of honey with one cup of agave syrup.

Maple Syrup –> Replace each cup of maple syrup with one cup of agave syrup.

Brown Rice Syrup –> When replacing a cup of brown rice syrup, use 1/2 to 1/3 as much agave, and increase other liquids in the recipe by up to 1/2 a cup.

Corn Syrup –> When replacing a cup of light corn syrup, use 1/2 as much agave, and increase other liquids in the recipe by up to 1/3 of a cup. Like corn syrup, agave nectar will not crystallize.

From Wikipedia, the free encyclopedia

Because agave nectar dissolves quickly, it can be used as a sweetener for cold beverages such as cocktails, smoothies and iced tea

Agave nectar (also called agave syrup) is a sweetener commercially produced in South Africa and Mexico from several species of agave, including the Blue Agave Americana (Agave tequilana) and Salmiana Agave (Agave salmiana).[1][2] Agave nectar is sweeter than honey, though less viscous. The majority of agave nectar around the world comes from Mexico and South Africa. Agave Sugar is not produced in Mexico but only in South Africa.

Agave nectar’s glycemic index and glycemic load are comparable to fructose,[8][9] which in turn has a much lower glycemic index and glycemic load than table sugar (sucrose).[10][11] However, consumption of large amounts of fructose can be deleterious and can trigger fructose malabsorption, metabolic syndrome,[12] hypertriglyceridemia, decreased glucose tolerance, hyperinsulinemia, and accelerated uric acid formation.[13][14][15]

Agave nectar is 1.4 to 1.6 times sweeter than sugar.[16] Agave nectar is often substituted for sugar or honey in recipes. Agave is commonly used as a Vegan alternative to honey in cooking.[17] Because it dissolves quickly, it can be used as a sweetener for cold beverages such as iced tea. It is added to some breakfast cereals as a binding agent.[18]

Agave nectars are sold in light, amber, dark, and raw varieties. Light agave nectar has a mild, almost neutral flavor, and is therefore sometimes used in delicate-tasting dishes and beverages. Amber agave nectar has a medium-intensity caramel flavor, and is therefore used in dishes and drinks with stronger flavors. Dark agave nectar has stronger caramel notes, and imparts a distinct flavor to dishes, such as some desserts, poultry, meat, and seafood dishes. Both amber and dark agave nectar are sometimes used “straight out of the bottle” as a topping for pancakes, waffles and French toast. The dark version is unfiltered and therefore contains a higher concentration of the agave plant’s minerals.[19] Raw agave nectar also has a mild, neutral taste. It is produced at temperatures below 118 °F (48 °C) to protect the natural enzymes, so this variety is an appropriate sweetener for raw foodists.[20]

To produce agave nectar from the Agave Americana and tequiliana plants, the leaves are cut off the plant after it has aged 7 to 14 years. Then the juice is expressed from the core of the agave, called the piña.[2] The juice is filtered, then heated to hydrolyze polysaccharides into simple sugars. The main polysaccharide is called inulin or fructosan and comprises mostly fructose units. The filtered, hydrolyzed juice is concentrated to a syrupy liquid, slightly thinner than honey, from light- to dark-amber, depending on the degree of processing.

Agave salmiana is processed differently than Agave tequiliana. As the plant gestates, it starts to grow a stalk called a quiote.[3] The stalk is cut off before it fully grows, creating a hole in the center of the plant that fills with a liquid called aguamiel. The liquid is collected daily and the fructans hydrolysed by enzymes into fructose and dextrose

An alternative method used to process the agave juice without heat is described in a United States patent for a process that uses enzymes derived from the mold Aspergillus niger to hydrolyze the polyfructose extract into fructose.[4] A. niger fermentation is “generally recognized as safe” (GRAS) by the U.S. Food and Drug Administration.[5]